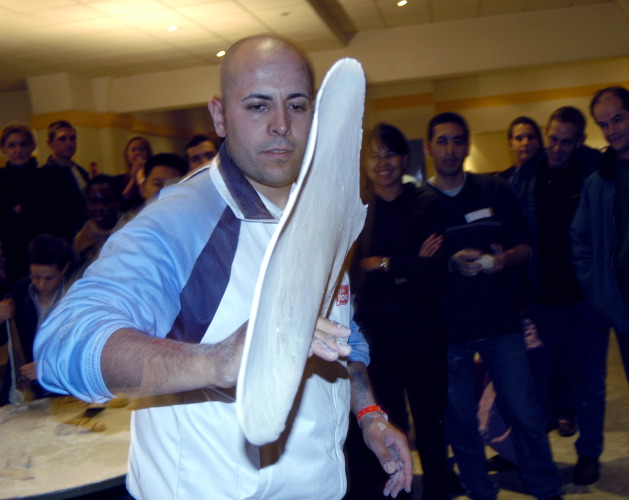 “THE ACROBATIC PIZZA” - 2004 VIDEO DV 4 MIN. PAL- SOUND-COLOURS In October 2003 Davide Bertocchi was invited by Robert Fleck to take part in the Nuits Blanches in Paris. He in turn invited the world champion of acrobatic pizza, Pasqualino Barbasso, to perform and hold a workshop, invoking aspects of Hip Hop culture and the showmanship of break dance performances, highlighting the similarities between the (circular) movement of pizza tossing and the playing of records by the djs. After Barbasso’s demonstration in the University canteen, members of the audience were invited to join in, resulting in an impromptu group performance and creating as a biproduct a collaborative « dough » sculpture. With this project Bertocchi fused the diverse elements within his work. Claire Staebler (Translated from French by Sara Harrison) photos: Mathias Gumprich